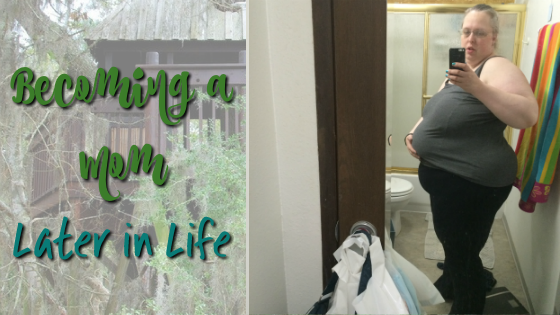 Affiliate Disclosure Statement: Please note that some of the links I share with you are affiliate links, which means I will make a commission at no extra cost to you should you click through and make a purchase. Click Here for full statement.

My husband and I tried for years to become parents.  By the time I became pregnant I was considered an older mom because I was over 35, I was 36 (37 at delivery).  We finally had testing done and found out we had unexplained infertility, so decided to start treatments.  We were starting with IUI (Inter Uterine Insemination) before we looked at anything more invasive.

Our first round I got pregnant but lost it right away, I have never felt so devastated in my life.  Due to my HCG levels my doctor could tell me almost to the day when I would miscarry.  Not only was it physically painful the emotional toll it took on me was great.  I tried to go to work a couple days after and had to go home.  I was grieving for a child that I had wanted so badly.  Personally, I did not think it would affect me so much as I was “only” 5 weeks.   Then I realized that it did not matter how far along I was, it was still a loss and painful.  Telling friends was difficult, but I did find other friends who had been through the loss and could help me process what happened.

We waited a month before we tried again that year, we did a total of 4 tries that year.  At the end of the year our doctor left state so we moved over to a CNM (Certified Nurse Midwife).  Her practice worked with a fertility hospital in Seattle, so had additional resources.  After we met with her, she changed up a couple of things and we tried again.  Our hopes were high because we could only afford 2 more tries.  I had lost my long-time job the year before and was only working part time.  On our 9th wedding anniversary we got the news that we were again pregnant.  We were cautiously excited, they watched me very carefully and my HCG levels.

This pregnancy took but I was scared the whole pregnancy.  I googled probably more than I should have because I was always worried.  Now as far as pregnancies go I had a good/easy one.  I only had morning nausea and if my schedule allowed me to sleep past noon I was fine.  My husband got lucky and I did not have any strong cravings that meant he had to go out in the middle of the night … lol.  I had no issues with gestational diabetes (was really worried about this one due to family history, my weight and diet) or blood pressure until the end.

I never really showed being pregnant till my 3rd trimester and even then, I never got the traditional baby bump.  My daughter started her stubborn streak in utero and never turned and did not move a lot.  Her head stayed up in my ribs, I also kept a waist, so we think she did not have as much room to move.  I found a great chiropractor that had extra training in working with pregnant women.  I have to say I think that made a huge difference for me and my physical comfort.  Between my daughter not moving around much and the placenta being between me and her I unfortunately did not get to feel her moving around much.

The end is near

Near the end of my pregnancy I did start having blood pressure issues so on top of the twice weekly nonstress tests and once weekly ultra sound checks (got to say that was kind of great but we never did get a profile shot of this child) they keep a close eye on my blood pressure.  Between being an older mom, weight and blood pressure at my 36-week check-up we decided that having a c-section the following week would be best, so I was scheduled for a c-section the following Friday and put on light bed rest.

We went through a lot to get to this point and the end was in sight.  My whole pregnancy was emotional for me and stressful in the fact that I was constantly worried that I would lose my baby girl, but obviously in the end everything turned out great.